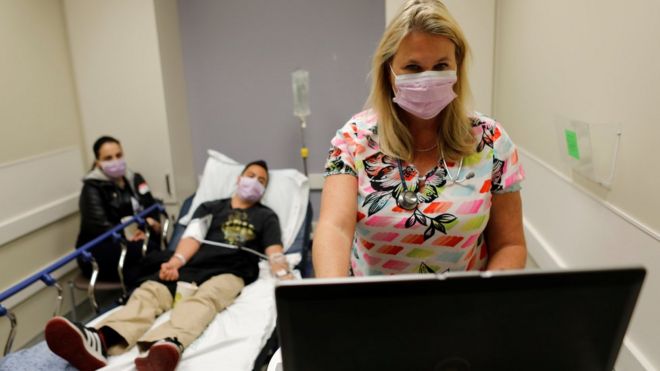 More Americans are seeking medical care for flu than at any time since the “swine” pandemic of nearly a decade ago, say US health officials.

Thirty-seven children have died and nearly 12,000 patients have been admitted to hospital nationwide.

The outbreak could surpass 2014-15 when 34 million Americans fell ill, says the US Centers for Disease Control and Prevention (CDC).

The director of the CDC, Dr Daniel Jernigan, said thousands of people were going to doctor’s offices and emergency rooms to seek treatment for flu-like symptoms.

“This is the highest level of activity recorded since the 2009 pandemic,” he said.

A 12-year-old boy in Florida, described by his family as a healthy child, became one of the latest to die from the virus.

Dylan Winnick died on Tuesday a day after developing a fever, according to stunned family members.

Schools in at least 12 states have closed this year because of the deadly virus.

Also being mourned is Karlie Illg Slaven, 37, who died on Monday in Indiana from a flu-related illness after taking care of her two sick children.

Her distraught father is advising the public to get a flu shot, saying his daughter was the only household member not to have been vaccinated for the virus.

Dr Jernigan said baby-boomers – those in the 50 to 64 age bracket – are currently being hit particularly hard.

The 2009 swine flu pandemic was exceptionally widespread because it was a new virus.

However, the H3N2 virus that has swept the nation this year is the most deadly of the so-called “seasonal” strains.

The strain, also known as the “Aussie flu”, has been around for 50 years and was first called the “Hong Kong flu” in 1968.

H3N2 also wreaked havoc during the 1997-98 and 2003-04 seasons, and is known to be particularly harmful for young children and the elderly.