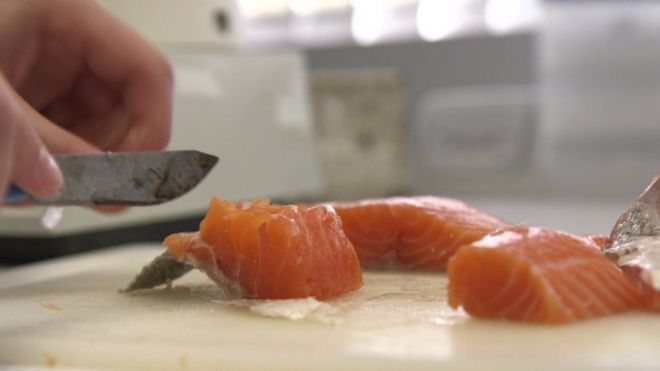 Researchers in the Highlands of Scotland are giving farmed salmon feed made from genetically modified crops.

The aim of the scientific trial is to increase the nutritional value of the fish.

The feed is rich in healthy fish oils, which the team hope will be absorbed by the salmon.

Critics argue that GM technology is “propping up” an unsustainable system of industrial food production.

Why does it matter?

Tests have shown that levels of an oil called omega-3 have decreased by half in farmed salmon in the past 10 years. It is what makes the fish so healthy. The oil is thought to be involved in brain development and reduces the risk of heart disease, arthritis and diabetes.

Even at current levels, farmed salmon is still a rich source of omega-3 – but levels are continuing to fall.

The salmon get their omega-3 from eating other oily fish, such as anchovies, that have been ground up and added to pellets that are sprayed into their pens.

But there’s a limited supply of anchovies and a growing demand for the salmon. So that means that all across the world there’s less oily fish to go round to make food for salmon.

So what’s the answer?

Researchers have added a gene from a type of marine algae to a camelina plant to produce the omega-3 fish oil. Lab tests show that fish fed on this oil have boosted levels of omega-3. The question that the researchers are now trying to answer is whether the same happens on a real fish farm.

Prof Douglas Tocher, of University of Stirling, who is leading the study is hoping his GM produced fish food will help turn things around and make farmed salmon as good for you as it once was.

“These are essential nutrients to our diet to maintain our health; particularly cardiovascular health, some inflammatory diseases and some cancers. Here in the UK, particularly up in Scotland, we suffer quite badly from many of the diseases for which dietary omega-3 has beneficial effects”.

“We are feeding a starving world and we need to find an alternative.

“The population is growing very fast and omega-3 should be available to everyone, not just to those who can afford it.

“There is going to be a gap between supply and demand, and that gap can be filled by GM technology.”

Will I be able to buy it in the shops?

If the trial is successful it will be used by the industry to produce “GM healthy salmon” which will be on sale in North and South America and Asia but – as it stands – is unlikely to be used in the UK and the European Union because of perceived resistance to GM products.

Prof Johnathan Napier, who developed the GM plants at Rothamsted Research in Harpenden believes that Brexit might provide the UK government with an opportunity to rethink its approach to GM.

“I think the technology has a great deal to offer. It’s not necessarily a silver bullet but I think we should use it along with other approaches we could adopt. Especially now that we are going to be leaving the EU, we could make this an opportunity as to how we regulate GM.”

I bet not everyone agrees with them?

Liz O’Neill, who is the director of the campaign group GM Freeze, believes that the GM solution increases what she sees as an intensification of the mass production of food:

“Fish farming is a fundamentally unsustainable and inefficient form of producing food. So, yet again, GM is being used as a sticking plaster to prop up unsustainable farming methods and the industrialised production of our food.

“Using prime agricultural land to grow a crop that is then fed to fish who are kept in potentially environmentally damaging fish farms is not a holistic solution to the problem. People want a short food chain and they want to be connected with their food.”