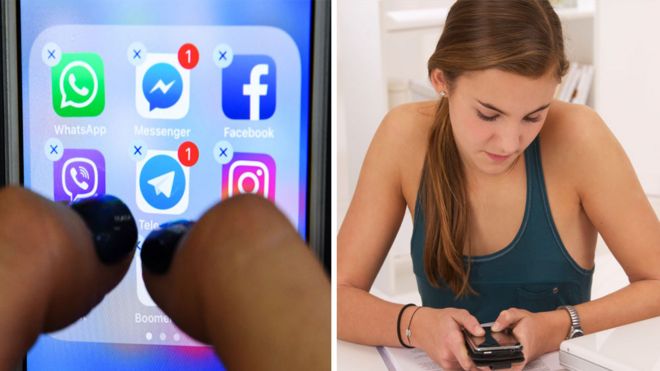 Facebook and Instagram are releasing a new tool to limit how much time people spend on their apps.

The announcement follows concerns that excessive social media use can have a negative impact on mental health.

Users will now be able to check how much time they’ve spent scrolling, set a reminder for when they’ve reach their allotted time, and mute notifications for a period of time.

But some people say it doesn’t go far enough.

“I wouldn’t say it’s a radical change or that it’s going to really change a lot about the way that most people use Facebook or Instagram,” Grant Blank, from the Oxford Internet Institute, tells Newsbeat.

“It strikes me as a way to balance their corporate interest of keeping people spending as much time as possible on Facebook, while still being responsive to people who find the continual notifications to be disturbing or distracting.”

Facebook published a blog post in December 2017 that acknowledged the negative effects of spending too much time on the platform.

In one experiment, students at the University of Michigan who were randomly assigned to scroll through Facebook for 10 minutes were “in a worse mood” at the end of the day than those assigned to be more active on the site – posting or talking to friends.

Another study from UC San Diego and Yale showed people who clicked on four times as many links or liked twice as many posts “reported worse mental health than average”.

‘What a waste of my time’

Lifestyle vlogger and Instagrammer Em Sheldon, 24, tells Newsbeat that checking up on her friends is an “all-day thing”.

“While I think it’s part of the job, I do think it’s a problem because we become dependent on our phones and on checking social media.

“If I’ve got some free time, I’ll fill that void by scrolling.

“Social media is 24/7 for me, but I think it’s something that has crept up over time – the need for me to just constantly be on it.”

Exercise? I thought you said extra fries 🤷‍♀️🍟 When your hair is a mess but you’ve got In N Out so who’s the real winner? Fries > good hair days. The question is: Shake Shack, Five Guys or In N Out? Cast your votes (aaaand who wants to come back to LA with me next month because I am tempted 🍔 🍟) #EmTalksTravels #InNout #InNOutBurger #animalfries #InNOutburgers #bloggercliche #whyareyouwearingsunglassesinside #carbsarelife

Asked if the new feature would reduce how much time she spends on Facebook and Instagram, Em said she “doesn’t know if it would help” because “I’m aware that I use social media too much”.

But she does agree that having reminder notifications could be useful.

“Maybe it would give me the kick I need to put my phone down.

“If something popped up saying: ‘You’ve been using this app for six hours’, I’d be like, ‘Wow, that is a lot. What a waste of my time’.”

Harry Hugo, co-founder of digital marketing company The Goat Agency, says the changes have been a “long time coming”.

“With the emergence of mental health issues – especially among young people, who are spending the most time on these platforms – it’s really important that we put things in place that can help limit that.

“If they understand that they’re spending hours a day on these platforms, maybe it will make them think twice.”

Harry understands the idea of spending a lot of time online, saying he used to use Twitter for 15 or 16 hours a day when he was a teenager – “which sounds unbelievably unhealthy now I look back at it”.

Ultimately, he thinks it’s up to people to take responsibility for their own social media use.

“Obviously these things are great preventative techniques, but they’re not going to change it for good.”