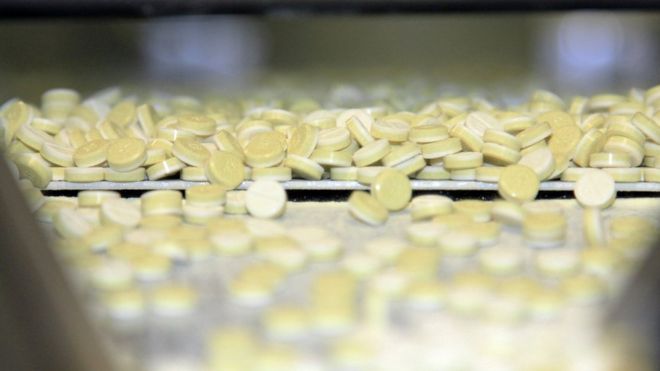 Two of the world’s biggest drugs firms are stockpiling medicines in case of supply disruptions after Brexit.

France’s Sanofi is increasing its stocks by four weeks to give it a 14 week supply of medicines.

Switzerland’s Novartis said it was also preparing for the possibility of a no-deal Brexit.

Sanofi, which makes insulin, is worried about any transport delays following Brexit, as most of its supplies have to cross the Channel.

“The uncertainty in the Brexit negotiations means that Sanofi has been planning for a ‘no deal’ scenario,” said Hugo Fry, managing director, Sanofi UK, adding this was in line with recommendations by the European Federation of Pharmaceutical Industries and Associations.

“Patient safety is our main priority and we have made arrangements for additional warehouse capacity in order to stockpile our products, where global supply allows, in the UK and increase UK-based resource to prepare for any changes to customs or regulatory processes,” said Mr Fry.

The extra four weeks of supply is being built up as most of Sanofi’s supplies arrive in the UK through the Channel Tunnel. Disruption to this route in 2005, when there were strikes in France, led to around four weeks of disruption.

Another area of concern is the need to send batches of medicine back to the continent for quality control, which could become difficult if there is a hard Brexit. This means that some quality controls tasks performed by its Haverhill manufacturing facility in Suffolk will be conducted in the remaining 27 EU countries.

“This will lead to 12 planned job losses across several functions by summer 2020 although we are doing all we can to mitigate redundancies where possible,” Mr Fry said.

“Sanofi is confident that its contingency plans will ensure that people in the UK can access the treatments they need after the UK leaves the European Union,” said Mr Fry.

Novartis did not disclose the extent of its plans but said that there were no plans to change its 1,500 workers in the UK .

“Alongside most other pharmaceutical companies, Novartis is preparing for the possibility of a no-deal Brexit. We are planning to hold increased inventories across our portfolio of medicines from both Novartis and Sandoz,” the company said in a statement.

“Novartis has been in close consultation with the UK government about Brexit-related issues since before the 2016 referendum, both directly and via industry associations. We have apprised officials of our preparedness plans and status, including plans to increase our UK inventory holding,” it added.

Sanofi said it had written to the Health Secretary Matt Hancock.

Last week, Mr Hancock said the NHS in England was preparing to stockpile medicines and blood in case the UK left the EU without a deal. He told the Health Select Committee that he had asked the department to work up options for stockpiling by industry”.

Other pharmaceutical companies have also begun to increase their stock piles. Last month, AstraZeneca said it was increasing drug stockpiles by about 20%in preparation for a no-deal Brexit.

It is not just pharmaceutical companies that are talking about stockpiling.

Plane manufacturer Airbus has said it may have to build supplies as its operates as “just in time” supply chain that replies on frictionless trade across the EU. UK engine maker Rolls-Royce has also warned about the need to stockpile parts